"If you're Catholic, you support pedophilia."

I'm not trying to be intentionally controversial here, nor do I mean to call out onto the carpet our members who are Catholic. I'm honestly just trying to reconcile in my mind how people can participate in a religion that has allowed this sort of thing to go on for so long.

Also, I'm using the term 'pedophilia' in the broadest sense and will not bother differentiating between pedophilia, hebephilia or ephebophilia. For the purposes of this debate we're talking about Catholic priests who have abused young people.

My question: Would you work for a company that knowingly allowed its executives to sexually abuse minors and then cover it up? Would you subscribe to a corporate culture that not only allowed, but sometimes even condoned, this type of behavior and then swept it under the carpet to save public face? If not, how is this different from the Catholic church? There are many flavors of religion. Why actively support one that so obviously condones pedophilia?

I guess I'm just so tired of hearing excuses like 'well it's not every priest' (like you would know anyway) or 'that doesn't happen in my parrish' (and again, you wouldn't know) or 'look at all the good deeds they do' (Jerry Sandusky did some good deeds as well). You are still supporting an organization that historically has looked the other way with regard to this issue, and I'm having a hard time understanding this.

I think it is horrible the way they cover it up and just move around priests from church to church who are known for the abuse. Why are they above the law? Hypocritical ********.


I was asked by a family member a while back if my going away from Catholic upbringing was due to a priest molesting me. It was because one of the churches I was dragged to had a priest who was found to do that. Scary.
OP
OP
D

The priests in my parrish growing up were constantly being moved around for various given reasons, and of course I myself knew why, but looking back what strikes me as particularly odd is how many adult parrishioners at the time (including my own parents) discussed these 'transfers' in hushed voices and sometimes a wink and a nod. How did people justify that?

Real, profound belief is a hard thing to abandon. My friend, who recently killed himself, was left to die as an infant by his messed up birth mother, and taken in by the Catholic church. He was raped as a child, not by a priest, but by one of his Catholic foster "parents". He never gave up his faith in the religion, in spite of this, though his faith wasn't enough to keep him from killing himself. It could prove to be an impossible thing, to expect people who really believe it to give it up because of the inability of some of the priests to keep from raping kids. If I were such a person I would certainly speak up very loudly about it, if I weren't willing to simply abandon my belief system and choose another religion.
OP
OP
D

Pickle Juice said:
Real, profound belief is a hard thing to abandon. My friend, who recently killed himself...
Click to expand...

I am so very sorry to hear about your friend, PJ. The things that people continue to do in the name of faith simply boggles my mind.

I was brought up very Catholic, but did not agree with many aspects of the church and its rules, so I stopped being Catholic when I turned 18. This was many years before I heard anything about the illegal and immoral coverup by the church. It about broke my father's heart when all the stuff came out about the pedophiles and the supposed men of God that enabled others to continue hurting children. He remained Catholic, but stopped donating. 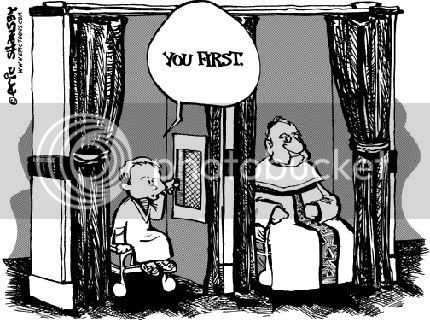 I was brought up Catholic and one of my good friends is a Catholic and I know she strongly disagrees with any sexual abuse of children and any shielding of the perpetrators of this crime so I would say this thread title is a bit over the top. I have heard quite a few people in the UK say that they consider all Muslims to be terrorists which is an offensive stereotype about all people who subscribe to a particular religion. I don't have any religious beliefs but I think there are a lot of people who believe in an afterlife and in a higher power and lead "good" lives and wouldn't consider harming a child.

That being said I have known adults who were sexually and physically abused by members of the Catholic Church and I do think the institution has made a lot of mistakes by not making sincere apologies for some of the crimes carried out by priests.

Digger said:
... The things that people continue to do in the name of faith simply boggles my mind.
Click to expand...

My great-great-grandmother and her daughter used to call my Gramma and her brothers bastards because my great-grandfather, their son and brother, married a Lutheran, and the children hadn't been christened or baptized or whatever it is, and weren't being raised Catholic. They used to come over while my Gramma's father was at work and beat her mother up in front of my Gramma and her brothers. They blamed her mother for turning her father away from Catholicism, though he turned away from it himself because it made no sense to him. Needless to say my Gramma grew up with an extreme intolerance of Catholics. I guess I am an odd atheist because I try to stay on the middle ground and respect that people need to have beliefs, even if I think they basically make no sense to me.
OP
OP
D

Moll Flanders said:
I was brought up Catholic and one of my good friends is a Catholic and I know she strongly disagrees with any sexual abuse of children and any shielding of the perpetrators of this crime so I would say this thread title is a bit over the top.
Click to expand...

But why? If you belong to an organization that knowingly protects pedophiles... why shouldn't you be held in the same regard?

I wasn't raised in any religion, so it's hard for me to imagine blindly following anything like that. But it does drive me crazy how they will cherry pick the things they like and ignore the rest. Even worse when they defend it by blaming the victim, like someone I know did recently. Oddly enough he's an Atheist, not a Catholic. Quite a few of us informed him as to the piece of scum we thought he was, in a very public forum.

Love this story. Even after admitting to hitting the priest, he was still found not guilty.
http://news.yahoo.com/william-lynch...iest-said-202746328--abc-news-topstories.html
M

Digger said:
But why? If you belong to an organization that knowingly protects pedophiles... why shouldn't you be held in the same regard?
Click to expand...


We as vegetarians and vegans belong to a society that legalises animal slaughter and I'm sure I must financially support unethical companies even though I don't want to. My Catholic friend doesn't actually go to church or donate money but she still has her personal beliefs.

Mr F wasn't a Catholic was he?
OP
OP
D

Moll Flanders said:
Mr F wasn't a Catholic was he?
Click to expand...

It certainly wouldn't surprise me if he was... but I think that's beside the point.

I don't think there is any harm in the title. People need to be jolted out of complacency and made to realize that they need to recognize this problem and speak out about it. I don't interpret it as accusing people who are Catholic of deliberately condoning the sexual abuse of children by clergy, but more of a "did you realize that by supporting the Church and not speaking out you could be seen as condoning it?".
OP
OP
D

PJ of course nailed it, although I'm inclined to be a bit less forgiving than she is. I'm not satisfied to simply accept that some members of the Catholic clergy have abused young boys and need our forgiveness. In my mind, anyone... and I do mean anyone... who continues to participate in Catholicism at this point, not only condones pedophilia but is an active participant in the cover up by looking the other way. I've had my fill of this... and if I have my way the entire institution will crumble to its knees as soon as f-cking possible.
Reactions: SuicideBlonde
M

I feel that maybe Digger you need to go and ask those questions yourself to your family. I am no fan of organised religion but I think it is unfair to paint all Catholics as abusers or people who are willing to ignore sexual abuse of children. I don't believe for a second that the people I knew at school, at college and at church were that type of people. It doesn't seem like a lot of people on here are Catholic anyway so I'm not sure how much of a debate this can be as there is nobody here to respond.
OP
OP
D

Moll Flanders said:
I feel that maybe Digger you need to go and ask those questions yourself to your family. I am no fan of organised religion but I think it is unfair to paint all Catholics as abusers or people who are willing to ignore sexual abuse of children.
Click to expand...

If you support an organization that protects pedophiles... then you protect pedophiles. Doesn't seem so complicated to me. Sorry but I'm just not buying this bullsh-t anymore. The Catholic church, and anyone who condones their behavior, needs to be brought down. Time for the whole silly archaic religion to be brought to its knees. The sooner the better.
Reactions: SuicideBlonde
M

Oh sorry, I realised that you edited your post while I was typing Digger. If it is so clear cut then by all means people should go and confront the Catholic people they know about the issue.

I think Digger is simply saying that if you're not part of the solution, you are part of the problem.

R
What would be your answers to these arguments?

Am I supporting to animal exploitation-Fast Food Job?

Support May 1, 2021
Dave hardrockmaster
D
C
Can anyone relate?