Here is a thought-provoking article, by a vegan, describing all the ways in which vegans go out of our way, despite our best intentions, to hurt the cause of animals. There are some difficult truths in there, so it will probably upset you, but facing the truth is always better in the long run than going into denial.

(It's not a new article, but I did a search, and it doesn't appear to have been posted here. There are some really important points in there that should concern all of us here, so I suggest that everyone read it and think about it.) 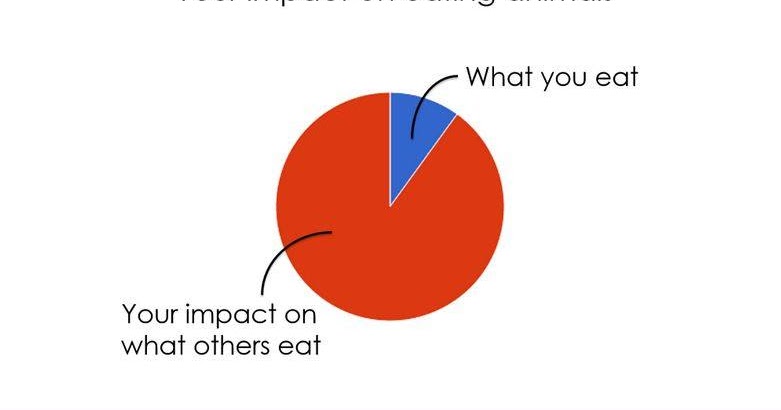 As I and others have noted many times, what we do with our example, our advocacy, and our donations is far more important than what we ...

Once you've read the article, please watch the video to see where the writer is coming from:

I found it interesting and agreed on some of the points made - however I did find the one liner generalizations of some statistics misleading. For instance, the link to "Meat-eaters are being put off going veggie because of certain aggressive vegans, says survey." actually lists "taste" as the #1 (81%) reason omni's are averse to giving up meat as opposed to being disgusted with some vegans attitudes at only 26%.

The linked article from psychology today used to back up
More than four out of every five individuals who go veg eventually quit!

had me raising my eyebrows, first, at the story being presented by the ex vegetarian who was "always hungry". Honestly, that sounds like an omni's projection of what vegetarianism/veganism must be like, rather than the confession of an actual vegan or even vegetarian, especially a multi-year one. Approaching 2 years now as a vegan and have no issues with satiation from food, provided I'm eating enough calories and fiber/resistant starch from whole foods. How did this multi year so called vegetarian survive every day being hungry? I call bs on the story.

The statistics on the same page are vague in terms of specifics like period of time people are vegetarian/vegan. I could completely see newbies (a few months or less) going quickly back to former ways but how about longer term vegans or vegetarians? The survey doesn't include a time frame for the points it is trying to make.

I can't get behind pushing cow instead of chicken simply because less sentient life is killed, which appears to be what he is advocating for. Sure, it's less life murdered but it's still murder, it's still cruel, it still wrecks havoc on the environment, contributes to human starvation for those robbed of their land for crops, and it still contributes to human sickness. To this end, I wonder what target audience he is hoping to reach? Oblivious omni's, vegans, or someone else?
Reactions: FlandersOD, Emma JC, Indian Summer and 3 others

Good job Nek!
My BS detector was going off, but I didn't' bother to check out the details. Thanks for that.
Reactions: Emma JC and Forest Nymph

I think this is intellectually dishonest and unproductive. If your goal in life is self-flagellate, congrats I guess???

This kind of garbage doesn't help students, poor people, people of color, the indigenous population, or people with eating disorders become vegan. This kind of garbage is for self-congratulatory ivory tower people like Gary Francionne, who has decided rescuing pets is oppression,\

For those of us who actually care about animals, the earth, and other human beings, we're going to focus on what we can do instead of what we can't. Jesus Christ.
Reactions: Emma JC

He and his partner have 7 rescue dogs and he encourages anyone who can to rescue/adopt animals.

ONE STEP FOR ANIMALS

This is a minimum ask approach, which should help. To ask the maximum would be to ask someone to adopt a full vegan lifestyle and make an honest attempt to eliminate all instances of support for animal exploitation from their lives where possible and practicable, such as ensuring their toiletries have not been tested on animals, that the historical and fantasy dramas they watch do not use real horses or other animals, that their investments do not support animal exploitation, that they don't, if possible and practicable, use these 9 everyday products you didn't know had animal ingredients, etc., all from day one. Of the following four asks, this is how they rank from easiest to hardest:

So, what's the deal with insects?

General Feb 15, 2022
FlandersOD
F
R
Why do people (online) mock those who are kind to animals?