What egg replacers can be used in boxed mixes? I've tried flax seed eggs, and ener-g egg replacer with absolutely awful results. I was wondering if I was just doing it wrong so I got some mix for my family who are still omnivores and made the mix with eggs and they turned out beautifully. Should I just be making all my vegan brownies and cookies from scratch and not bother with boxed mixes? Because I tried to make vegan brownies from a recipe online and they turned out absolutely dreadful.
R

I was wondering the same. I use bobs red mill egg replacement but it hasn't worked at all, my brownies were mushy and so were my muffins....

I have never used a box cake mix as a vegan, so I don't have experience with that. In looking at the ingredients in a box mix though, I see that most cake mixes have a built in leavening such as baking soda and powder. I know that for homemade lighter cakes, I will make a "buttermilk" which consists of plant milk and a tablespoon or two of cider or plain vinegar or a tablespoon of lemon juice. If you use soymilk it will curdle nicely like dairy buttermilk. Other plant milks do not curdle but the effect still works. This is a form of egg replacer that tends to produce a lighter and fluffier product. This will even work for pancakes. The acid in the buttermilk reacts to the leavening agent (ie baking soda) and helps the cake or other product rise, and the thickness of it also acts as a binder. Adding a pinch of salt will also help the process. I have better luck with full fat plant milks and those with a higher protein content such as soy milk or hemp milk.

Here is an article that gives a good representation of the different ways to replace eggs:

Vegan yogurts are another nice way to substitute eggs when you are trying to keep the texture light, but they can be tricky due to the fat and sugar content, so if you do use them, you would need to adjust other fat and sugar added to the recipe (for example, if the recipe calls for 1/4 cup of oil but you use the yogurt, you should leave out the oil or the cake would be too heavy).

I rarely use flax eggs for cake recipes unless it is a richer dense cake like carrot cake. I also rarely use commercial egg replacer. I often do the "buttermilk" trick, or add yogurt or applesauce or even just oil and leave out the egg. Depends on the recipe. Getting a light vegan cake can be a challenge but it's not impossible. I've had success with vegan lemon bundt cake recipes, and with chocolate cake, both of which tend to use the buttermilk method. Oil does add moisture also, as does the yogurt, but a little goes a long way.

I haven't tried it for cake yet, but the liquid from a can of chickpeas (also called the "brine") is excellent for making meringues and as an egg white replacer. I once made a vegan "angel food cake" batter with it and it whipped up just like egg whites. Unfortunately, although it climbed the angel food cake pan during baking, it eventually fell. But apparently it works well for other stuff. See links. I made a beautiful gluten free vegan pizza crust with it, better than any non gluten free crust I have made actually. Here is info about using chickpea brine:
http://gayathriscookspot.com/2016/01/vegan-vanilla-sponge-cake-with-aquafaba/
https://www.vegansociety.com/whats-new/blog/13-amazing-things-you-can-do-aquafaba

And here is my angel food cake attempt and pizza crust and a coconut cake I did that was successful:

I made some fairy cakes using chickpea water instead of eggs and they turned out fine. Three tablespoons per egg and whisked it up added sugar and Pure sunflower spread, then flour and that was that. They didn't last long.
Reactions: Lou

Hello.
For my family, I've made box cake by using canned pumpkin only. Its been a huge favorite every time they've asked me to make it.
Reactions: Lou

You can use the chia seed egg in any baking recipe! It works great!
Reactions: Lou

I've heard you can use a 330ml can of fizzy juice in place of egg and water or oil in boxed mixes! Apparently the carbonation makes everything nice and fluffy, like egg whites would. I haven't tried it yet though, but it's on the list!
Reactions: Lou

Bananas can replace eggs, chia seed mixed with water or aquafaba, soda drinks. Also Orgran do egg replacer for baking , but i found it to be a little bitter.If you do a Google search, there should be lots of images which will tell you the equivalent quantity to use as if you were using an egg.
Reactions: Lou 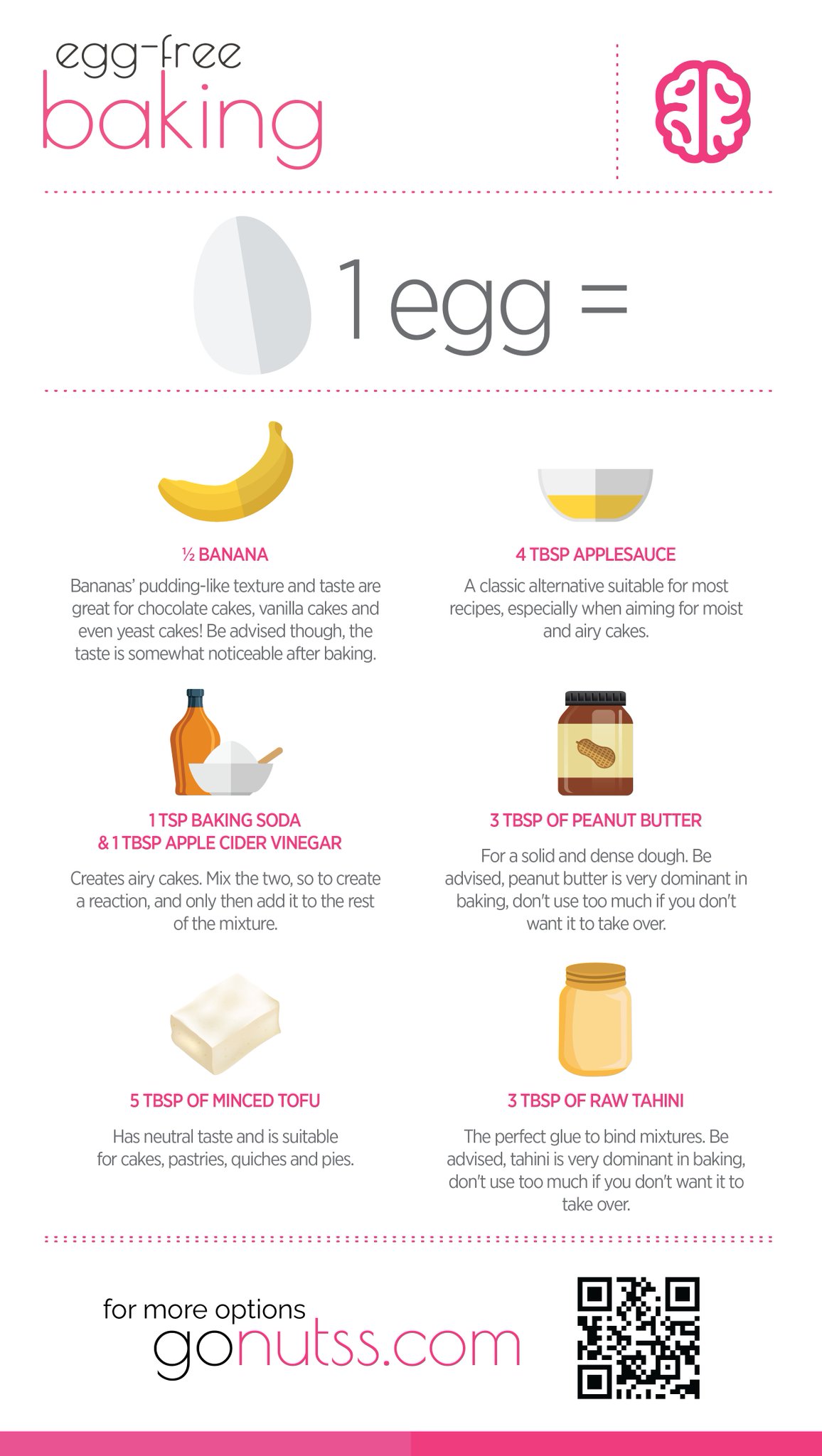 doctordrg said:
Here's a nice egg-free baking translator to hang on your fridge

Nice One! It's Amazing & very nice egg-free baking. I like it.

I have a boxed carrot cake mix that calls for 3 eggs and oil. What would the best substitute be for this mix?

Wow. I don't recognize any of these member's names.

Lou said:
Wow. I don't recognize any of these member's names
Click to expand...

Other than Natureboung neither do I! I liked her so much and lost touch!

I've made from scratch brownies with silken blended tofu and have wanted to try with a mix. Just 1/4 cup tofu blended with 1/4 cup water
Reactions: Lou