Hello everyone! Just wanted to share something I recently discovered.
Since going vegan, I haven't had a single ice-cream, which was one of the worries I had when transitioning (still, I don't think the pleasure derived from a couple of spoonfuls is more important than the suffering behind them), but the other day we had some regular, store-bought ice-cream at home.

I live in Argentina, and, being an heavily Italian-influenced culture, we have gelatto stores everywhere, they are a big part of our culture. And it is common that people buy a kilo of gelatto and keep it in the freezer. My family was enjoying the gelatto when I had an idea and I wrote an e-mail to the company - I wasn't expecting them to answer, but they answered immediately. I asked them whether their "water" ice-creams were vegan. Gelattos here are divided into two groups: cream-based and water-based. I have always been a bigger fan of the water-based ones, by the way, but they might include gelatin. So I wrote to them asking about this, and they told me that their water-based ice-creams are vegan! I couldn't believe my eyes!

Needless to say, I jumped spoon first into the big ice-cream container and felt very merry. I have decided to contact other gelatto stores to find out which ones are vegan-friendly. I feel very happy, and wanted to share this with all of you, because maybe it happens to you what happens to me: I take it for granted that things are not going to be vegan and decide not to ask, and end up missing out on many vegan options that I didn't know were there.
Have a lovely day, everybody!
Reactions: alleycat, Forest Nymph, HappyRoxy and 2 others

That is wonderful and thank you for sharing.

I am sure you have heard of Nice Cream, yes? put any of your very ripe bananas in the freezer (peeled and cut into 5 or 6 pieces) and when you wish to enjoy some ice cream, put some of the frozen banana in a strong blender or a food processor and add whatever you like, berries, a bit of vanilla, a tad of salt, nut butter, date (carmel flavour), cacoa powder.... spin it up and eat. Nice Cream. ?

Nice cream is amazing! I always add a few tbs of cocoa powder in mine and a splash of vanilla and soy milk (just a little too help it process). The cocoa makes it taste just like regular chocolate ice cream, and covers the Banana taste completely for those that don't like the flavor.
Reactions: Emma JC, HappyRoxy and Lou

Ámbar said:
and they told me that their water-based ice-creams are vegan!
Click to expand...

I wonder if this is some kind of cultural or translation thing. Are we talking about Sorbetto?
Reactions: HappyRoxy

I have had sorbet many times. But it is not my favorite. And around here most sorbets are fruit-flavored. but I would like to find one that is chocolate. So I warmed up the google machine and found this 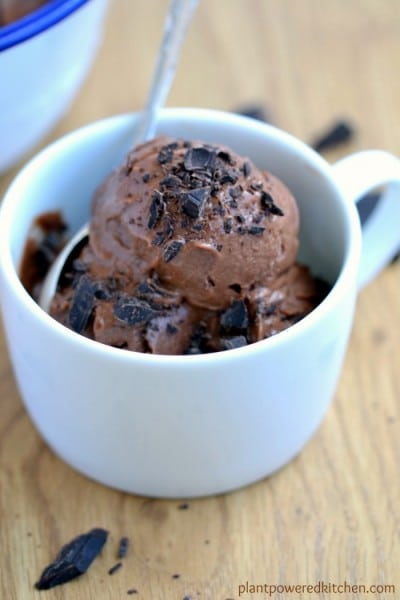 A decadent chocolate gelato made with just 5 ingredients, and prepped in just 5 minutes! Dairy-free, nut-free, sugar-free, and vegan.

Can't wait to try it.

I wonder if this is some kind of cultural or translation thing. Are we talking about Sorbetto?
Click to expand...

I believe so. I think it's a cultural thing. Water-based icecream sounds cute though lol.
We are lucky down here that there are many vegan icecreams available in the grocery stores....not so much in an icecream shop though, unfortunately.
OP
OP

Hmm sorry, I don't know what a sorbetto is. I googled pictures and it looks like regular icecream to me... Sorry!

But all icecream stores sell water-based icecreams and yes, they are mostly fruit-flavoured.

Here is what I could find.


Sorbetto is also called sorbet. Unlike like gelato, sorbetto is always a dairy and egg free frozen treat. It is, therefore, the lowest fat content of the three treats. Sorbetto is made with sweetened juice, fruit puree, or water and it is denser than gelato. It includes sugar and flavourings. The process is similar to making ice cream in that it is churned and has a similar texture. It is kept at a cooler temperature than gelato to keep its consistency and flavour.​
​

Gelato vs Ice Cream vs Sorbetto: What’s the Big Difference? - The Perfect Scoop

Which would you choose? Gelato vs Ice Cream vs Sorbetto? Take a read, learn the difference between our sweet treats, and enjoy the delicious tastes.

perfectscoop.ca
​
The article points out that both gelato and ice cream can be dairy-free.
Reactions: HappyRoxy
OP
OP

Thanks for the info! Still not quite sure how to call in English what I know in Spanish as water-based icecream, but it's ok, I don't need to know the word since I have no problem communicating here ahahhaa

Ámbar said:
Thanks for the info! Still not quite sure how to call in English what I know in Spanish as water-based icecream, but it's ok, I don't need to know the word since I have no problem communicating here ahahhaa
Click to expand...

What is the word in Spanish?

Ámbar said:
Thanks for the info! Still not quite sure how to call in English what I know in Spanish as water-based icecream, but it's ok, I don't need to know the word since I have no problem communicating here ahahhaa
Click to expand...

Sorbet or sorbetto is the right word in English. I imagine Sorbetto and Gelato have Italian origins.

And then there’s Italian Ice, or water ice as we call it in the Philadelphia area. I don’t think it’s churned like Sorbet.
Reactions: Lou

I grew up with Italian Ice. Never see it around anymore. But I remember there were some great flavors. Including Chocolate.
Oh, there are Icees at 7-11. But I am pretty sure that is different.
Reactions: HappyRoxy

Lou said:
I grew up with Italian Ice. Never see it around anymore. But I remember there were some great flavors. Including Chocolate.
Oh, there are Icees at 7-11. But I am pretty sure that is different.
Click to expand...

OH! Ooops. I think they are Slurpees here too. I think Icees are those flavored shaved iced things. But that is what I was thinking of.

I am thinking they may be referring to "helado de agua" or maybe this Almond Ice Cream which is made with water.