Greenpeace and friends of the earth have not made veganism a clear need.

I am disappointed and put off the fund raising motives of the greenpeace and friends of the earth major organisations as well as the WWF for wildlife...that they have not made it clear that deforestation...desertification...and wildlife habitat loss are all major causes of animal agriculture !

it takes 1000's times more resources of land water etc to produce 1kg of protein from flesh than it does plants ! fact ! a cow drinks 30 liters of water PER DAY and creates masssive manure and urine pollution so to produce the 1kg protein from flesh in a hamburger is massively inefficient.

I think communicating this massive failing of these organisations is important. 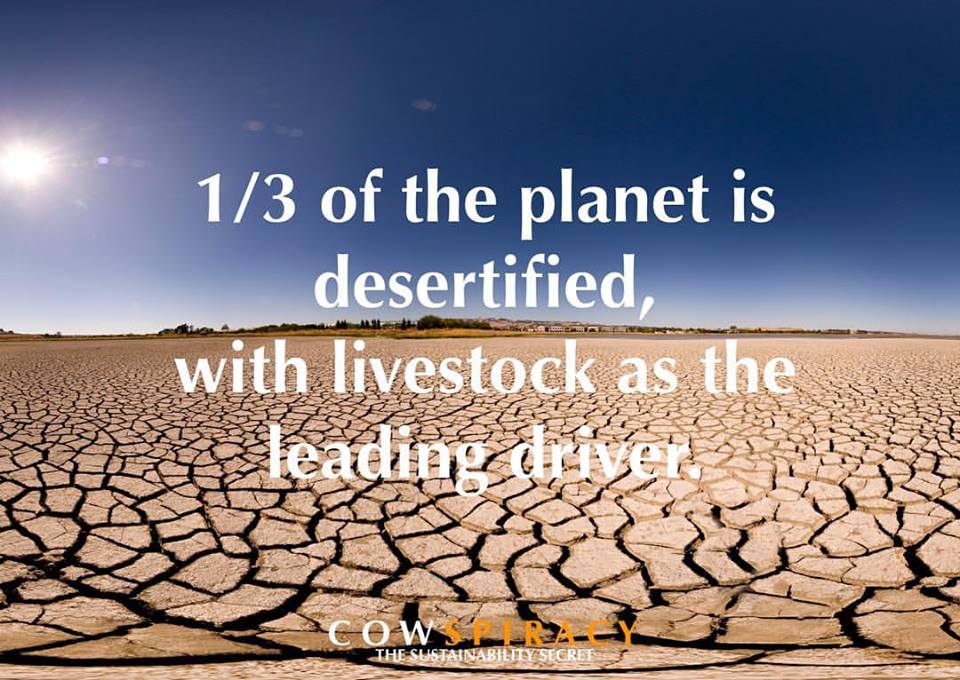 I know. One of the things that makes me saddest/angriest (depending on the day) while studying environmental science is how so many organizations (and professors, etc.) dance around veganism, because they themselves don't want to give up animal products, or because they're afraid of offending someone.
Reactions: Vegan Dogs

At least there will be plenty of sand for them to bury their heads in!
S

Sea Shepherd are vegan, and they do a lovely vegan cookbook.
Reactions: Vegan Dogs

Yeah. It's sort of bewildering. Cowspiracy did a really fine job of pointing this out.

I was so disappointed in Incoviennet Truths 2. The words "livestock production" are never mentioned.
the movie Before The Flood was a bit better and spent at least 5 minutes on the subject of livestock production. And it got one of the best lines. Something like other methods will cost millions and decades, but eating habits can be changed for nothing and right now.
Reactions: Vegan Dogs
OP
OP

Cognitive Dissonance...is what the "disconnect" is called when we cannot get our minds around something like habits that rule any reasoning and intelligent thought regarding our eating animals and not connecting with their suffering of their deaths. I often think that our dismissal of our own species starving and unfortunate in our world due to environmental or political factors is rather the same problem...selfishness...of habits...mind blocks us to facing up to "changes" needed for an "overall" benefit. People may wish the best for their children, other people in general, but are not prepared to take "change" actions to help that happen. The "panacea" the "comfort factor" is provided by "feeling a good person" by giving a small donation to whatever the distant or "other people" cause is. So many "meat eaters" donate to dog and cat resues for example but are not vegan...and think nothing of the suffering of animals humans breed and kill for food....but the mere fact they "donate" to rescues now and then makes them "feel good persons".

This climate change...starving people...desertification of our planet...destruction of hundreds of thousands of species already extinct and decreasing be it elephants or hedgehogs or the lesser "sexy" species...is not something politicians or such organisations that ask for funds such as those mentioned face up to...all they do is ask for funds for some lesser effect costly schemes to make people "feel good" from donations and put pressure on governments to spend money on dealing with the lesser causes of the environmental problems of our planet....but they lack the moral fibre to face up to saying clearly what every individual could do that would do the most benefit simply to avoid talking of "changes" needed to a "sacred" activity of humans..."eating pleasure habits". Cowardly and damaging to the planet and wildlife and the poor of this world let alone the massive holocaust of billions of animal victims.

That Leonardo da Caprio who mentions briefly the animal eating habits in the B4 the Flood documentary even does not set an example himself and loves it is reported eating steaks.

The truth is...the world cannot be fed on an animal based diet...factory farmed animals "are" the only way to feed people as the world population gets richer and copies what the rich do and eat and that is destroying the planet and wildlife due to the vast amount of land needed to grow the crops to fatten those animals for their short lives before slaughtered. Chickens are only 6 weeks old adult size today everywhere when killed ...frankenstein suffering pains in hearts, organs, legs due to their unnatuural body weight then killed age 6 weeks old...it is horrific animal abuse. I do not believe that until the rich nations of this world set an example there is any point finger pointing at the huge populations of China and India to do something to stop this planet destruction as they get richer drive more cars yes but more importantly since electric cars are on the horizon as the mass transport mode...change eating habits away from animal corpses.
Last edited: Oct 11, 2018

Lou said:
the movie Before The Flood was a bit better and spent at least 5 minutes on the subject of livestock production. And it got one of the best lines. Something like other methods will cost millions and decades, but eating habits can be changed for nothing and right now.
Click to expand...

When I first saw that movie, I was not aware of the extreme environmental impact of the livestock industry. But the strongest quote in that movie was:

“If everyone just stopped eating beef and started eating chicken, we would save the world”.*

*= Might not be a 100 % accurate quote, but something along those lines.
Reactions: Vegan Dogs

If everyone stopped eating beef and starting chicken, there would be environmental benefits, but the total suffering would increase since chickens are kept in worse conditions and more are needed to be killed per calorie. I think it's a very bad idea. Replacing beef with almost any plant food would be better. It's also enviromentally better.

Almost all its campaigns do both these two things together. Since it's modus operandi is to combine 1 and 2 into a specific campaign to get a company to do something specific, and since it isn't obvious how to do this with meat, they don't do it.

As I write it says this on Greenpeace USA "tell big corporations to end plastic pollution". Surely all the people buying the plastic, all of us, are guilty as well. But they don't focus on that. They just blame Coca Cola.

Greenpeace doesn't want to go against the general public, or criticize its own supporters.

Looking at the latest updates on its UK site right now the 47th update on the 10th page is the first one I found about meat. World meat free week was the subject and
https://www.greenpeace.org.uk/what-we-ate/

"Greenpeace is calling on cities across the world to reduce global meat and dairy consumption. We’ll empower and engage policy makers or public authorities to take steps towards changing their practices on the types of food they purchase. Greenpeace aims to influence cities or public institutions to introduce two plant-based meals a week in public canteens by 2020." That's a quote from their site, but interest how the focus is still on authorities rather than individuals.

It would be great if Greenpeace campaigned for an end to meat subsidies and for taxes on meat. They are very gentle. I'd say about 5% of Greenpeace's time is probably spent on animal agriculture, even though it may be responsible for 50% of all environmental devastation. It's a huge disconnect.
Reactions: Vegan Dogs

Yeah, please don’t get me wrong here. I agree with you. Swapping red meat with chicken is far from the perfect solution.

Talking about regulations on red meat, this new article from The Guardian is actually quite interesting. Now it just comes down to how strong the farmer/red meat lobbyists are….


OPS! Apparently I was not allowed to post a link , but there is a new article in The Guardian called "Taxing Red meat would save many lives"
Reactions: Vegan Dogs

I'd support taxing meat (although continuing to give subsidies while taxing doesn't seem to make sense; arguably ending subsidies should for the first thing to do).

I guess many animal rights activists would not support it because it legitimizes but in the short term ending all meat consumption is not going to happen and therefore reducing it (which is what taxing probably achieves) is the only option.

Once people eat meat more occassionally they understand better how to do vegetarian meals, and it's easier to get them to go vegetarian anyway.

When people talk about these things, there is often a debate about whether it will work, by which they mean reduce consumption. If the taxes are at the right level, it works either way. If consumption reduces, health and environment is improved. If consumption remains at the same level, taxes are raised to save people from the health issues and protect the environment. Either way it works.
Reactions: Vegan Dogs and Emma JC

Most people do have very little experience in making vegan/vegetarian food as meat is often added as default when people cook dinner. And yes: a (heavy) tax seems to be the only option that really works.
Reactions: Vegan Dogs