Vegan as a teenager

Im a 15 years old girl, meaning I still live with my parents.
Many years ago I wanted to become a vegetarian for ethical reasons, my parents were NOT happy.
But after a lot of arguing I was allowed to try it out... I never looked back haha
They are a bit more open minded now. Normally I make my own dinner and they have theirs, but sometimes we all have plant based dinners!
They REFUSE to watch anything about how animals are treated or other 'vegan' documentaries tho.
They refuse to see the truth?

For a looong time I’ve been wanting to go vegan as a step further, but I’m scared my parents won’t allow it.
They think veganism is super extreme and bad for you.
My mom: "Doesn’t like that vegan stuff."


I’ve also been struggling with anorexia :/
I’m currently in treatment for it and since I’m underweight I have to gain weight.
I follow a meal plan made by a dietician to make sure I gain enough.
The doctors, dieticians etc. are not fans of vegans.
When I started treatment I was barely allowed to stay vegetarian!! There’s SO much dairy on the meal plan btw

Its really annoying being forced to eat something that you don’t want to eat.
I mean I don’t even LIKE milk...
I hate the taste AND the thought of it.
I have to mix oatmilk in it, just to camouflage the taste.
I prefer oatmilk so much over cows milk.
I’m not a freaking baby cow.

My mom has allowed me to have oatmilk instead sometimes, but I would still like to transition fully?
I want to do it now, but what do you think? Should I wait till I’m recovered?
It’ll be about 1/2 year until I can choose my own food...
And even then, my parents will probably freak out and think I’m restricting

ughh I just feel so bad for the cows several times every single day. I don’t know what to do. I really want to go vegan, I definitely CANNOT wait until I’m 18.
Any advice?
Reactions: Emma JC

Hi there FAA! Welcome to VF from a fellow Scandinavian!

I have absolutely no experience with anorexia, so I'm a bit hesitant to give any advice. Your health must be the number one priority, even if that means you can't be vegan right away. Let's face it, you wouldn't be a good advertisement for veganism if you went vegan and then ended up in hospital!

That said, I can assure you that it's perfectly possible to have a healthy weight as a vegan. (For example, lots of celebrities are vegans these days, most of them tend to at least look very healthy, although they're probably a mess of drug abuse when they're away from the cameras!) It's also perfectly possible to be underweight, overweight and even obese as a vegan, just like with a non-vegan diet.

I think if you want to become vegan that you should take the time now to prepare for it. Read up about nutrition, including nutrition for meat-eaters. Figure out what nutritious vegan foods are available in the stores near you.

Also: When you go vegan, and maybe you should already: Please supplement! Vitamin B12 is super important. Similarly, it's also a good idea to supplement with vitamin D, especially for someone at our latitudes where the sun isn't very helpful for long periods of the year. It's also not easy to get enough calcium on a vegan diet unless you drink fortified plan milks, so please do so! There are some tinfoil-hat vegans out there who will want you to believe in pseudoscientific ideas and flimsy/anecdotal evidence about getting all you need from "natural foods" only. Don't listen to them.
Last edited: Oct 18, 2019
Reactions: KLS52, Emma JC and Lou

Hello FAA,
Welcome to the forum. I hope you will find this to be a good resource and a safe place to vent.

Oh, and Indian Summer's advice is just about perfect.

I'm of two minds about giving you advice. The first part is the anorexia issue. And I agree with Indian Summer about health being your number one priority.

The other thing about anorexia is that it is a well known and understood that anorexics do use veganism as camouflage to hide their anorexia. Doctors have even published papers on the subject. Its more socially acceptable to say something like, " I can't eat that cause it's not vegan." Instead of, "I can't eat that because I'm afraid it will make me fat."

And with that in mind, it's easy for me to understand your Doctor's, dietician's and family's concerns. However, you said "
There’s SO much dairy on the meal plan btw

Its really annoying being forced to eat something that you don’t want to eat.
I mean I don’t even LIKE milk..."

That really got me questioning the strategy they are using. I actually don't know what is in the guide book for treating anorexics but I'm pretty sure it does not include requiring them to eat things they don't like.

With all the misinformation out there it isn't surprising that they think milk is good for you. But its 2019, you can hardly skim the headlines and not see how many healthy vegans are out there, how many doctors recommend it, and how many things are wrong with the meat and dairy industries. I realize that your parents are actively filtering out this info. but I expect better form medical professionals.

I expect that your dietician makes meal plans for you to follow. As a first step, which i think is pretty do-able is to just tell your dietician to make a one to one substitution, soy milk for cow's milk. Fortified soy milk is so similar in nutrients to cow's milk it can be subbed 1:1. That makes it pretty easy on the dietician. Calories, fat, protein, calcium, B12, are all amost the same (the soy milk companies do that on purpose). Soy milk will cost a little more than cow's milk. But it is organic and costs about the same as organic cow's milk. You can also probably order soy milk in bulk, they come in shelf stable versions and save money. If you don't like the taste of soy milk, try the vanilla flavored. As a recovering anorexic you don't need to count calories. You could even get the chocolate. or just use the soy milk in your cereal, oatmeal, and smoothies.

Final thought, if the Dietician is totally against being vegan, then maybe you ask to switch to a vegan one. Not sure how its done in Denmark but in most countries, dieticians are licensed and governed by a professional organization. So you can probably use the internet to find a vegan one.

Lou said:
Soy milk will cost a little more than cow's milk. But it is organic and costs about the same as organic cow's milk.
Click to expand...

I think actually that organic soya milk within the EU is not fortified, as that would break EU rules for organic labelling. I could be wrong, but I think this is the case. Therefore, I almost never buy organic plant milks. It's a stupid rule - I would want to buy organic plant milk, but it needs to be fortified.
Last edited: Oct 18, 2019
Reactions: Lou

Indian Summer said:
I think actually that organic soya milk within the EU is not fortified, as that would break EU rules for organic labelling. I could be wrong, but I think this is the case. Therefore, I almost never buy organic plan milks. It's a stupid rule - I would want to buy organic plant milk, but it needs to be fortified.
Click to expand...

Oh, yeah, I have been aware of the EU's labeling issues. I think in some places they can't even label it as "milk".

Hello and welcome to the forum!
What I would like to add is that there is a book called „Generation V“ about how to go, be, and stay vegan as a teenager... 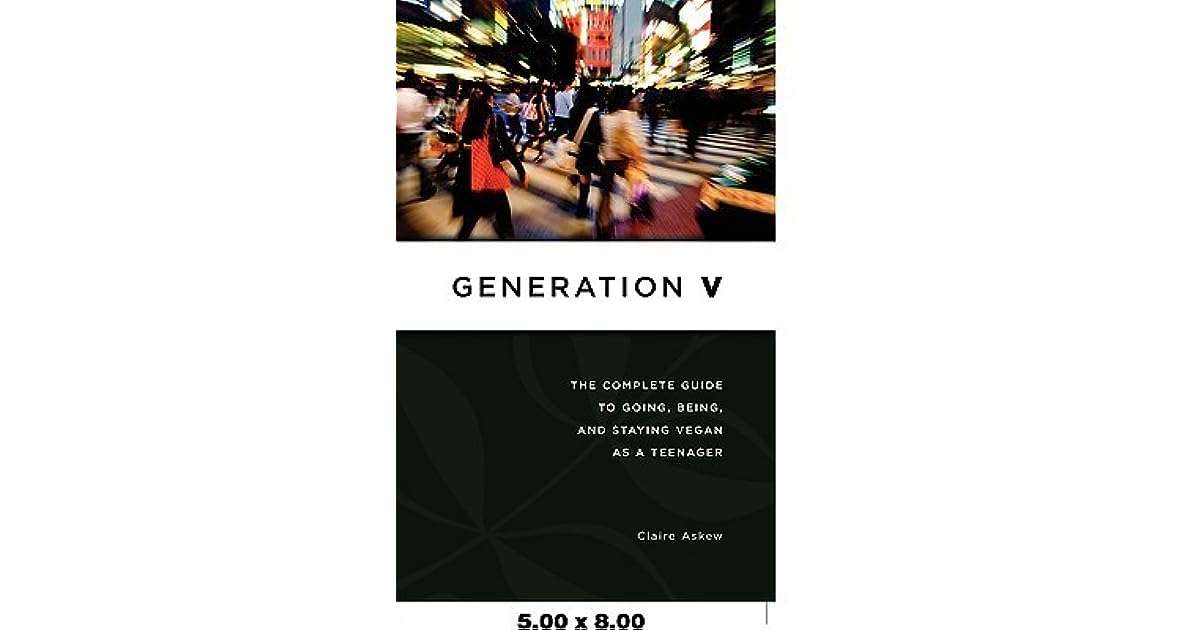 Going vegan is the single most important thing you can do if you want to get serious about animal rights. Yet, going vegan isn't always e...
www.goodreads.com
Reactions: Lou

welcome @FAA to the forum!

You have received lots of good advice here and I agree with it.

Having just watched Game Changers which is a documentary about plant-based athletes, might I suggest that you ask your parents to watch that with you? It talks about the health aspects of eating a plant-based diet and there is very little to no awful pics of animals being mistreated. If they do agree to watch that and enjoy it then maybe also suggest What the Health, as it is similar.

Keep us up to date on your progress.

Andy_T said:
Hello and welcome to the forum!
What I would like to add is that there is a book called „Generation V“ about how to go, be, and stay vegan as a teenager...
Click to expand...

Good suggestion.
that reminds me. YouTube is full of teenage vegans with teenage vegan advice. Not sure if they are worthwhile or not. Tho, Bite Size Vegan who is not a teen has a lot of advice. Want to know how to go vegan with unsupportive parents or guardians? Do you want to stop eating animals but don't have your family's support?

There are a lot of former anorexics who are vegan who have written or vlogged about it.

Kate Flowers is the only one I can think of off-hand.

Which reminded me of another Kate. Kate Morton who is a therapist.

And PB news has this video.

One more point - I understand that doctors dealing with eating disorders can be sceptical of claimed veganism, simply because there are many people with an eating disorder who CLAIM to be vegan to their families and friends to hide the fact they are eating next to nothing. So asking for a vegan diet - that can includes immense amounts of calories - can be seen as suspicious. Also, many doctors have very little knowledge of nutrition.
Reactions: Emma JC

That is true. Also, that is why god invented dieticians.

Doctors being suspicious of ED patients saying they want to be vegan is probably justified. Not sure how often an ED uses veganism as a disguise - it might not be very often at all. But there are journal articles on it so it can't be totally rare. It could turn out to be sort of a bias. Or it could just be doctors being doctors.

There are RDs that are biased against veganism. I've read some of their published articles. I've found that to be disturbing. However, there are plenty of RDs that aren't against veganism. Some are even pro-vegetarian. And a few are even vegetarian or vegan themselves. It only makes sense that a person who want to be vegan have an RD that shares their values.

Unless a vegan is an athlete, he or she won't be eating "immense amounts of calories". Most vegans just eat a regular amount of calories. However, they do tend to eat more food. And if you are a WFPB vegan and avoiding sugar and oil, the meals can appear to be huge. But still contain few calories.
Reactions: Emma JC

translate any recipe from non-vegan to vegan!

Need advice about how to go vegan

Transitioning May 6, 2022
FlandersOD
F
W
US I’d like to go vegan except for health & social reasons