Are vegans, especially in the West, more likely to be atheists? It seems impossibly hard to convince Christians and Muslims to become vegan, given that meat-eating is sanctioned in their holy texts.

Not always. In fact a lot of people on this forum are either knowingly or unknowingly deontological in their veganism. Deontological veganism is similar to religious thought where people are more obsessed with their personal purity than anything of consequence that actually helps animals.

Gary Francione is a typical deontological vegan though he's more harmful than most. Most deontological vegans stay home, are polite and don't engage in activism except to maybe talk to loved ones. They remove harm by removing animal products (sometimes to a nit picky extreme and start arguing about avocado, oil or honey) BUT don't do any active harm to animals or the vegan movement. Unlike Gary Francione who attempts to enforce his personal purity in a narcissistic, harmful way by making public smear campaigns about any animal rights philosophers or activist organizations which don't meet his personal definition of perfection. This is toxic because of his level of power as a law professor, and it turns people away from veganism who start seeing people like him as religious nuts, and even worse slows any rational and practical progress to help animals in the real world. I think in a past life he lead the Salem witch trials.

There are less harmful forms of this in Seventh Day Adventists and Krishna Consciousness (vegetarian not vegan) who do so by religious prescription but don't make a career out of intentionally slandering Mercy for Animals in the process.

I personally consider myself spiritual not religious. We had a thread about this before.
Reactions: PlantEater

PlantEater said:
Are vegans, especially in the West, more likely to be atheists? It seems impossibly hard to convince Christians and Muslims to become vegan, given that meat-eating is sanctioned in their holy texts.
Click to expand...

I don't know about Muslim literature, but both Christians and Jews are both in the position of having conflicting holy texts in this regard. Just looking at what is commonly referred to as the "old testament", there are, in addition to instructions about the necessity of and method of the slaughter of animals, there are direct condemnations of such practices by many of the prophets within these writings. In addition, the book of Genesis lays out a vegan diet for mankind in it's first chapter, and the book of Daniel uses it to prove it is superior to the Babylonian King's diet. Saul aka Paul of Tarsus either lowers it to the "weak in faith" or a "doctrine of devils". Some of the Gospels have Jesus eating fish, but then we have the last supper, which is strongly indicative of veganism.

I come from this background and upbringing (although I do not identify as Christian or attend church), and I've come to recognize that intellectual honesty is impossible if one believes all the writings in the bible are without addition or error, and also believe that while there is corruption in the text, it does still contain many basic truths, including truth in relation to God's intended diet for mankind.
Reactions: Emma JC and PlantEater

I have no basis for this but I do think that there is a vegan/ atheist correlation.
Maybe the only reason I think this is that I have always felt that atheists do a pretty good job of thinking on their own and not getting swayed by the majority. which is how I feel about vegans, too.
Reactions: Three Chickpeas, Andy_T, Jamie in Chile and 2 others

There is indeed a vegan and atheist correlation. There also seems to be a big correlation between veganism and alcohol abstinence. Which is cool.
Reactions: Andy_T and PlantEater

PlantEater said:
Are vegans, especially in the West, more likely to be atheists? It seems impossibly hard to convince Christians and Muslims to become vegan, given that meat-eating is sanctioned in their holy texts.
Click to expand...

Based on my own experience of talking to Christians about veganism, I would say yes. Almost all Christians believe in a Jesus who never sinned and who ate fish and lamb, which means to them that there cannot be anything morally wrong with meat or animal products, end of story.

But personal experience is not always representative of general trends, so here is something a little more scientific, surveys showing that yes indeed, most vegans are irreligious:

The Reason Most Vegans Are Atheists or Irreligious

Studies have found that most vegans are either atheist or not religious, and there are a number of possible explanations why these groups are more likely to be vegan. In a 2017 survey of 11,000

However, I am a little reluctant to say something like belief in a fish and Passover lamb eating Jesus is the reason veganism is not more widespread. Belief in Jesus could probably vanish overnight and then people would just find something else to justify their use of animal products. They could choose from any of the justifications used currently by non-Christian nonvegans. It isn't like adherents of Abrahamic religions have a monopoly on animal use.
Reactions: Andy_T and Emma JC

I personally consider myself spiritual not religious. We had a thread about this before.
Click to expand... 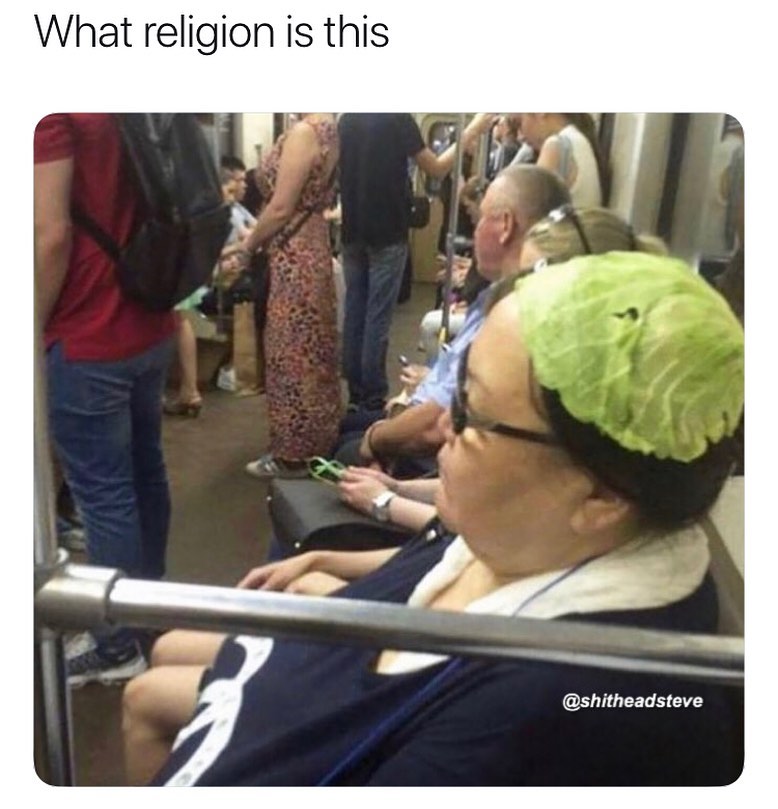 They have fought for the right to wear their religious headgear in official situations.

But they are, of course, not atheists.
Reactions: Veganite

Other than that, I, too, think that many of the motivations that lead a person to become a vegan (logic thought, compassion for all beings and renouncing of "tradition" if it can not be consoled with the first two) are similar with those motivations and thought processes leading a person to becoming an atheist or agnostic.

Andy_T said:
........thought processes leading a person to becoming an atheist or agnostic.
Click to expand...

My favourite lines on atheism and religion were, I think, penned by Dominic Behan:

I'm atheist. I'm not agnostic about other mythical entities and I don't have reason to make an exception for gods.

Taoism is the only religion whose teachings have had value to me. I'm not a taoist but I respect it as school of wisdom, a kind of natural philosophy. It's emphasis on harmony and the inevitable flow towards a state of equilibrium really holds up in light of modern understandings of physical processes, ecology and cosmology.
Reactions: Lou

Harry Potter and the Sacred Texts

Jesus is the Problem