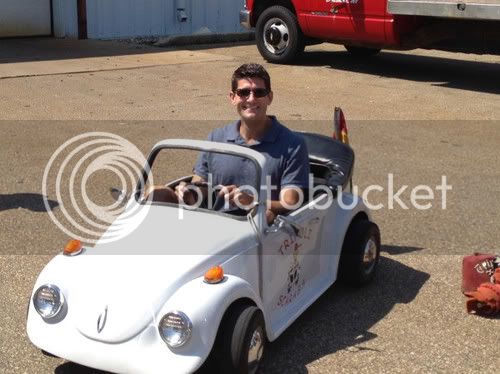 I think he should give up his schoolboy crush on some of those ideas.

Reminds me of Mr Bean's car. Or that man in the Simpsons who is really tall and drives a VW beetle and is too big for it.

ROMNEY/RYAN 2012 - Throwing granny under the bus and tying the dog to the top.

I am so embarassed that that man shares my surname : ( .

The 2012 Ryan budget also received criticism from elements of the Catholic Church, specifically from the United States Conference of Catholic Bishops and from faculty and administrators of Georgetown University. In its letter to Rep. Ryan, the group of Georgetown faculty and administrators criticized the Ryan budget as trying to "to dismantle government programs and abandon the poor to their own devices," going on to say that Catholic teaching "demands that higher levels of government provide help—"subsidium"—when communities and local governments face problems beyond their means to address such as economic crises, high unemployment, endemic poverty and hunger." The letter also criticizes Ryan for his attempts at "gutting government programs" and states that Ryan is "profoundly misreading Church teaching."[61] A statement issued by the US Conference of Catholic Bishops criticized the Ryan budget in similar terms.[62] Ryan rejected the bishops' criticism that his budget plans would disproportionately cut programs that "serve poor and vulnerable people."[63]
In May 2012, Ryan voted for H.R. 4310 which would increase spending on defense, Afghanistan and various weapon systems to the level of $642 billion - $8 billion more than previous spending levels.[
Click to expand...

The Republican ticket is a disaster....
I am scared....
Reactions: SuicideBlonde

Ryan has voted twice to enshrine marriage bigotry into the United States Constitution even though he did vote in favor of the Employment Non-Discrimination Act. Still, he voted against the Matthew Shepard Act which enforces federal penalties for homophobic and racist hate crimes. He also voted against adoption rights for lesbians and gays in Washington, DC. He is an ardently anti-woman candidate voting against women’s right consistently. He even co-sponsored an amendment to the Constitution to try and give rights to fetuses called the Personhood Amendment. This is a widely unpopular amendment attempting to impose radical Christian theocratic views of when life starts on everyone. Ryan, despite his adherence to Ayn Rand’s economic philosophies, is an ardent Catholic theocrat.

ThinkProgress notes about Ryan and Rand that “Ryan heaped praise on Ayn Rand, a 20th-century libertarian novelist best known for her philosophy that centered on the idea that selfishness is ‘virtue.’ Rand described altruism as ‘evil,’ condemned Christianity for advocating compassion for the poor, viewed the feminist movement as ‘phony,’ and called Arabs ‘almost totally primitive savages.’” In the past, Ryan has called Rand his inspiration for getting into public service- ostensibly so that he can dismantle the government- and even given her books away as presents.
Click to expand...

And here's a 12 Things You Should Know on him.

In some ways I wonder if it is a good thing he is there. He might actually lose Mitt romney a lot of votes, I am hoping, as his views are so nutty it might put off some people who would have otherwise voted Republican (though it would be awful if they ended up winning).
Reactions: KLS52, Jocelyn1 and kibbleforlola

Yes. I'm hoping that Ryan is to Romney as Palin was to McCain.
Reactions: SuicideBlonde, KLS52 and Freesia
OP
OP

Scorpius said:
ROMNEY/RYAN 2012 - Throwing granny under the bus and tying the dog to the top.
Click to expand...


If he was driving that, he could go under the bus too and the dog would barely have to duck.

Why is it that creepy ******* morons are seen as these bright "Idea Men" in the Republican party? I think a lot of right-wingers look upon Ryan as being this really smart guy who has this really smart tax plan for the US, even though in reality he's probably completely out of touch with common sense.
R

I don't see a big difference between Ryan and Democrats personally. Corporations will run this country regardless of which of the two parties wins. This may be the second straight election Obama wins only because the Republicans pick a horrible Vice President.

rainforests1 said:
I don't see a big difference between Ryan and Democrats personally. Corporations will run this country regardless of which of the two parties wins. This may be the second straight election Obama wins only because the Republicans pick a horrible Vice President.
Click to expand...


It would make a huge difference and be terrible. On top of the corporations running the country, there would also be a further loss of women's rights, gay rights/marriage would suffer and even more funneling of funds towards the super rich and increased war funding. Its definitely not the same as another democrat government.
Reactions: thefadedone and Scorpius
R


Freesia said:
It would make a huge difference and be terrible. On top of the corporations running the country, there would also be a further loss of women's rights, gay rights/marriage would suffer and even more funneling of funds towards the super rich and increased war funding. Its definitely not the same as another democrat government.
Click to expand...

The Democrats have created our empire, created our immigration policies that will cause so many problems, and created the Federal Reserve. There is a reason why the two parties have worked together to ensure the third party candidates stand the least chance possible of winning. There's a lot more similarities between the two parties than there are differences.
http://www.alternet.org/guess-what-percentage-americans-know-military-spending-increasing
It is Obama, Bush, and Clinton who has increased our military spending.
http://www.opensecrets.org/pres08/contrib.php?cid=N00009638
Corporations gave a lot of money to Obama in 2008.
OP
OP

Corporations give a lot of money to both candidates. They're hedging their bets.

OP Article said:
so Ryan, who is now forty-two,
Click to expand...

On the other hand...

I suspect we have a conspiracy on our hands!
Reactions: Freesia and Blobbenstein

True Vegans And Vegetarians Your Opinion Is Needed

B
Smoothies and Smoothie Bowls

So happy to finally found a group like this!