Not related to companion animals, but instead animals that make brief companionship with you. Share your random animal encounters here!

Today while bringing in the dumpster and recycling I accidentally frightened a field mouse of some sort that had been resting under one of them. It skittered out into the road. I embarked on two campaigns immediately afterward: one to photograph it (which I did), and another to scare it out of the road before any cars came along (while avoiding being hit myself). Thankfully the road wasn't busy and no cars showed up, but I made a fool of myself in trying to scare the mouse over to the other side. I remember picking some random plant stalk and attempting to throw it in the direction of the critter. The plant fell two feet short and it didn't move it all. I then made "hssh!" noises at it like one would a cat that is stealing one's chair, and it still did not move. Eventually it just got bored and ran into the neighbor's lawn.

Before we had the siding changed on the house, we had a family of little brown bats that would come back every year to roost in the attic vent. It was up high enough and got great sun during the day. It was probably something like 40-60 bats total. Anyway, the summer of 2008 was when I rescued 8 different baby bats at different times; it actually might be more than that. I can't remember exactly, I know that I saved some the summer before, as well. They would fall out of the nest and not be able to climb back up. Some of them would end up on the ground and they didn't make it because the ants got to them But the others would cling to the bottom of the house and I'd have to go out and try to get them (they would try to hide under the wood, so it made for a fun time trying to pick them up!).

So I would rescue them, call my friend and her mom because they had a lot of experience in hand-raising bats. We were actually able to get a few of them back into the nest, and the bats that were there were VERY loud...some weird human climbing a wobbly ladder and invading their space but it worked.

Anyway, here are a few pictures of some of the bats, and the side of the house. Here's the wiki on the Little Brown Bat. 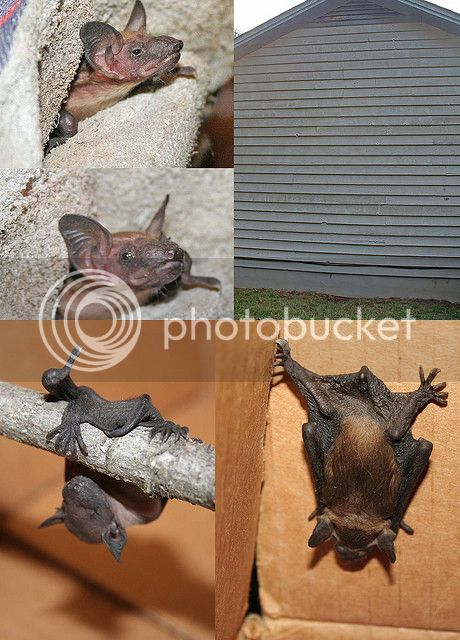 I had an incident with a bat a few years ago. It somehow got into the money jar in my room. We took it outside and freed it.

Turtle I saved by shooing it off of a busy main road.

I posted this somewhere...can't remember if it was this forum or not...posting it anyway
Reactions: sallyomally and Rosie1

Nothing nearly as exciting around here. We have the occasional possum. I leave out cat food and apples in the winter and
water during the hot summer months. They ran from me at first,but now will sit and wait patiently.Some think they're scary, but I find them very cute.

We have a skunk that lives in our backyard, we have an abandoned little waterfall and pond thing that makes a sort of cave which is perfect for him to stay in, and then we have apricot, nectarine, and apple trees, as well as grape vines in our yard which he comes out to eat at night. One day shortly after we moved here and didn't realize the skunk was in our yard, Lady went outside very early in the morning, at around dawn, because we forgot to close the dog/cat flap that night (now we have to be diligent about that because Lady is an idiot and goes and gets herself sprayed or attacked by him), and she started shrieking and woke me up (she doesn't bark really, she just shrilly screams/yelps/squeaks loudly like a tiny dog with a microphone).

I went to the kitchen and looked out the screen door and saw her standing there barking at a cat, and I remember thinking, why is that cat showing Lady its butt?? I opened the door and yelled for Lady to come in and leave the cat alone, and then the skunk turned its head towards me a bit and I saw the stripe on its back and its face, and still I was dense and thought, Woah, that cat is so huge and fat and fluffy!! Then it took me about another minute of yelling at Lady to come in (I didn't have my shoes and was too half-asleep and stupid to go get them), and then it suddenly clicked that this was a skunk (which I'd never seen before, but I live in a more rural place now, I guess that's why), and then I ran outside and pulled Lady in (she didn't get sprayed, the skunk had just been standing there).

A few days later the dogs went out at sunset and suddenly both dogs started barking and shrieking. I went outside and heard a weird hissing and saw something in the dark striking out from the waterfall-pond-cave thing and hitting Frank's face, and saw Frank shaking his head and snorting and going all crazy. I figured out later that it was the skunk scratching and hitting his face, but at the time I thought it was a snake (I'm not sure why I keep mistaking a skunk as so many different animals! But my mom keeps scaring everyone into thinking we shouldn't go outside because there's snakes here now that we don't live in OC), and I ran screaming about a snake and then suddenly it smelled like gasoline or something, it was really strong and like some sort of strong chemical, gas smell.

The dogs were freaking out and trying to get inside and roll on carpet and whatever they could find for a minute before we grabbed them and held them down in the bath tub. I still thought it was a snake that maybe sprayed weird smelling venom on them (which I don't know if any snakes do that but whatever), and my mom thought a neighbour somehow threw gas on them. Then the smell ended up turning into the normal skunk spray smell, and we realized they'd been skunked.

A couple months ago, Lady again managed to get herself skunked, and I keep catching her barking at it (luckily before she gets to getting skunked) if she gets out too early or too late at night, but Frank hasn't had any more problems with it and Twinkle hangs around near the waterfall pond thing all the time and hasn't had any problems, either, so now we just have to keep a good eye on Lady so she doesn't keep having run-ins with it.

Ohmigosh I love bats! I just had a squee attack.

When I was in new york I made friends with a bunch of squirrels. My mum's boyfriend snapped a shot of me sat on the grass, surrounded by five or six of them. Need to get that picture. They were so friendly!
Reactions: sallyomally
OP
OP

sallyomally said:
Whoa.... Maybe he was a zombie...
Click to expand...


I was thinking more of a vampire beetle.

Given that I may have exaggerated slightly when I said that he tried to rip my skin off.

Picture of the scary beasts that stung the hubby twice. Pretty awesome, actually.

Yeah that's a pretty tiny nest. I wouldn't worry about it too much.
Reactions: KLS52

Woah those are freaky, though the nest is pretty cool looking! It's so weird how much scarier wasps are than bees, at least bees are all cute and fuzzy.
Reactions: KLS52
L

I live in Florida, so we definitely have creature encounters! Once a 3-foot alligator was blocking my front door. (I didn't want to call anyone because they kill them for the money.) He left when he got enough sun.

We also have a couple of black racer snakes in the yard, I saw 2 at one time, which was rather freaky.

Years ago, a pygmy rattlesnake was curled up in the door jamb of my cousin's house. She called the snake guy, and he was really excited because it was apparently a faux rattlesnake and non-venomous (and rare.) He was really ticked off when I said he couldn't keep it for his "educational snake zoo" and stormed away, not removing it from the door. It kept shaking its fake rattle tail; we just left it there, and it got down and went away.
Reactions: KLS52

This little guy made my morning!

Both creatures I am familiar with! Toads are so fun, they look so awkward all the time.

Whoa...I posted those pictures from my phone...didn't realize they were so big and fuzzy! lol.

I love toads! I'm not sure we get hummingbird moths around here, though. I should read up on them.

A few years ago, I rescued a female yellow-bellied slider from a Walmart parking lot. I jumped out of the car, and probably looked like a mad woman as I was trying to make people slow down/stop. I was waving at people and pointing to the turtle. lol
Got her home, and set her up in a giant rubbermaid bin with water and our biologist friend picked her up later on the next day. He confirmed that I was right about her being a her. He released in the big urban woods we have here (it's about 2100 acres). So I hope she ended up thriving there.

She has some lettuce stuck in her mouth, in these pictures. When I took her out to the front yard to hang out a bit, she kept looking at the crappy woods (which are being torn down and developed) across the street and kept trying to make a run for it. 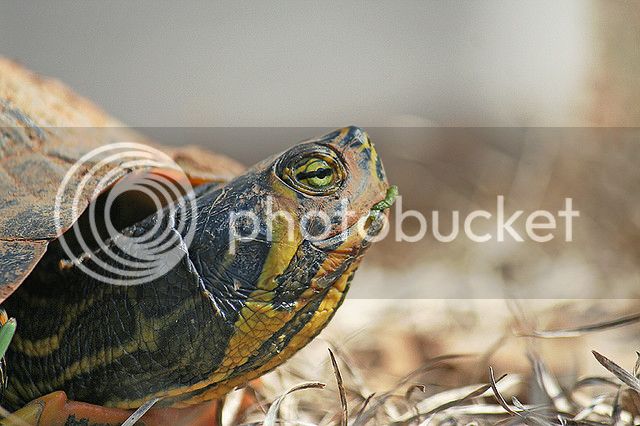 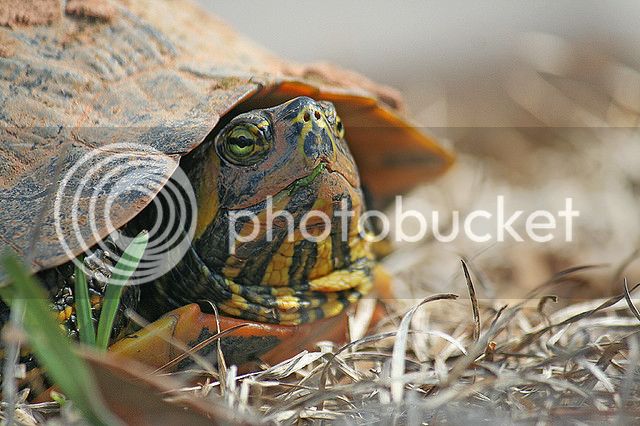 Animal Advocacy The next frontier for animal welfare: Fish

O
EU A climate Holocaust will be the savior of earthlings