Lou, we miss you!

It's been some time now since we've seen Lou posting. He appears to be MIA. I normally would not reach out in such a way, but as Roger put it, "Lou is one of the most prolific posters on the forum", and he is missed. I'm quite sure others have noticed as well.

I am really really hoping Lou is okay in his life, and no serious drama has come upon him. While we can sometimes disagree on forum discussions, I kinda doubt Lou would run with his tail between his legs as a result. The "Lou" I know has a lot thicker skin. So lets hope Lou is okay, and not sick or injured.

I've received negative ratings, myself, and can't say I enjoy getting them, but as we all know it is the nature of our reputation system. We're not all going to agree 100 percent of the time. Personally, I have never liked reputation systems on forums, as they can sometimes create bad feelings. I am really hoping this is not the case with Lou. As I said, the Lou I know has a lot thicker skin than that.

Sadly, this is all too common on the Internet. We just have no way of knowing what's happened. So I would like to encourage other regular members to post something in this thread in support of one of Vegan Forum's most prolific posters, Lou. His thoughtful responses and kind words are missed.

We miss our resident roadrunner. 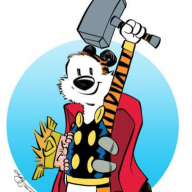 Yes! I noticed that Lou was missing too!

I hope he is well and will return.

Yes, Lou, get your butt back here.

I'm back. I do have thin skin. I did run off with my tail between my legs.

My feelings were not hurt cause of a negative vote on the reputation meter. Tell you the truth I didn't even know about that till it was just pointed out to me. My feelings were hurt with just old-fashioned words. I feel/felt that I was attacked personally and insulted. Sure, I admit I shouldn't let those kinds of things bother me. But it does. Maybe because I thought this was a safe place. Isn't compassionate synonymous with vegans?

I suppose thinking this was a safe place I had let my guard down.

I just discovered these kind words and sentiments which have gone a long way to making me feel better.

I would never be bothered by someone disagreeing with me. as long as someone can explain why they disagree with me I welcome it. New ideas and new perspectives should never be discouraged. It's how we learn.

But being called out, calling me not a vegan or not "vegan enough" or whatever bothers me on all kind of levels.

I am glad to see that at least a few people appreciate me. thanks.
Reactions: Kristyna, StrangeOtter, seekingdhamma and 2 others

Lou said:
But being called out, calling me not a vegan or not "vegan enough" or whatever bothers me on all kind of levels.
Click to expand...

I see this everywhere... So annoying. Non-vegans or new-vegans expect those who have been vegan for a long time to be 100% hardcore vegans who don't even breathe in the same room as non-vegans. I'll put the definition of veganism in the rules somewhere veganism isn't a competition to be the purest but to be better, better at not sucking.

All view points and thoughts and questions and activities should be welcomed and able to be discussed without judgement and name calling. It would be a pretty boring world if we were all perfect - Stepford Wives comes to mind. Revel in our diversities and don't diss, DIScuss!

We are all certainly a diverse bunch, that's for sure

It would seem quite apparent that us human's are flawed, in that we can sometimes make mistakes. Hopefully, we all learn from them. I hope we all take this as a lesson learned. People here have feelings, and they can be hurt. There's no need for us as intelligent people to debate in such ways that hurt feelings. We should all take this as a lesson, and be more mindful and intelligent in posting.

I don't want Nekodaiden to feel hurt either. I know his post was coming from his heart in a very passionate way, despite the tone it set. There's a lesson to be learned from this, and no one is exempt. Moving on now...

Lou said:
But being called out, calling me not a vegan or not "vegan enough" or whatever bothers me on all kind of levels.
Click to expand...

Damo said:
I see this everywhere... So annoying. Non-vegans or new-vegans expect those who have been vegan for a long time to be 100% hardcore vegans who don't even breathe in the same room as non-vegans. I'll put the definition of veganism in the rules somewhere veganism isn't a competition to be the purest but to be better, better at not sucking.
Click to expand...

I feel the competition comes mainly from veganism (+)

Historically, it’s been the same. Veganism grows when it is defined as a diet of exclusion without added requirements. That is,exclusion of all animal products that one eats. Necessarily, one must include more whole/wholesome foods if it is to sustain health.

When you start adding things like animal rights, extra environmental concerns etc is where the competition comes in. Speaking generally, there is nothing wrong (and plenty right) with concern over these things, but including them into the definition of what it means to be Vegan invites ego and along with it boasting and competition to see who is “the most Vegan”. Vegans can be environmentalists and animal rights activists of course. But the latter two should not be included in the definition.

As for just the diet (of exclusion of animal products)- if it’s defined as anything remotely approaching a willing and knowing participation of eating animal products, then that will compromise the very word Vegan and what it means. People struggle when they first start (I did), but after a while it should become second nature. If you fail, so be it, you weren’t a Vegan if you knew and chose. In other words, you chose to shed your Veganism and make an exception. Just admit it. If you want to be Vegan again, start a new day and try again.


In this sense it’s not about purity, it’s about willingness and effort without compromising the word Vegan for the sake of a label and being part of a group. No ego needed. No competition. No twisted definitions.


Oh, and @Lou. Welcome back. If you’re eating Vegan today and not knowingly and willingly eating any foods of animal origin, you’re a Vegan today. Just like I am and anyone else who is abstaining from animal products today. No special requirements. No lofty philosophy or daring animal rescue missions needed. No competition or ego needed nor wanted. You’re as pure a Vegan as anyone else who abstained from all animal products, Today.
Reactions: StrangeOtter

Troll. Are you a former member with a faux account?

Lou surely is very much appreciated and an important part of this forum.
His writings are, what I have seen coherent, intelligent and well-meant.
Last edited: Dec 13, 2018
Reactions: Kristyna, hopeful, mavrick45 and 1 other person

Introduction & Explanation-We are 'The Vegan Trappers'

D
UK Vegans and Vegetarians in Care or Hospital

Support Feb 25, 2022
Deleted member 14050
D
O
EU A climate Holocaust will be the savior of earthlings

We need a "Dating Section"