Is a fish diet more ethical than plant based diet?

I’m sorry for writing so much. This topic is important to me so I couldn’t shorten it. Please read until the end, i bet you won’t regret it at all!
in the last thread, I figured out that I was not clear enough, so I’m posting this new thread because I really want to reach the truth. This was the last thread: EU - Consuming fish is more ethical than eating plants

What I said was:

given that vegan food production harms insects and rodents(by its production process)- the production process of cows and chickens is probably even more harmful to those insects(because chickens and cows are fed with vegan food). however, if we pay on fish murder, we do not necessarily pay for plant food production(because some fishes are drugged out of the ocean and are not fed up with vegan corps). its even safe to assume the more animals are killed for vegan food the killed for plants.
please help me find the truth about this. ive been really strugling with it.
Click to expand...

People didn’t get it right in that thread, so I want to make this clear now: I hate animal abuse just as much as everybody else in this forum does, and I do not tolerate excuses. This is not an excuse, but a genuine ethical concern that has harmed my animal right activism(that’s right, I am a new activist). My ideal form of activism has been driven by my absolute hatred for the exploiting industries, and by my certainty that it is wrong, in every way , shape and form.
And another thing- I am not talking about a regular carnivorous diet(animal flesh, cheese, milk, honey and eggs), I am talking about a diet that includes only vegans stuff, and marine animals that we don’t feed with crop- Because vegan food production harms mammals, rodents and insects(and it’s not a troll, I truly care about insects because they obviously can feel). Keep in mind I’m not talking about cows for example or any other animals that we do feed with crops. I’m talking about marine animals that we just drag out of the ocean and kill them on the spot, without giving them any food.
And if you still think I should just ignore my ethical concern, keep in mind that the process of ignoring such ethical concerns- is the very reason why people do bad things and also don’t go vegan, therefore I refuse just letting it go.


the single legit claim that was brought up last thread was: fishing causes dropping garbage in the sea, and also sea pollution which also harms third side animals. However- I’m not sure that fishing harms animals less than vegan food production. But for now, It actually makes more sense to me that the crop process harms animals the most(because seriously- ants and insects must be huge in number where they grow the vegan stuff). This is the only argument I know of, that veganism might not completely destroy that easily, or not at all. It genuinely freaks me out because I used to think that veganism can destroy any single claim for animal eating, in terms of pure ethics, and pure objectivism.

the other claim that was brought up was that an avarage fish we kill also eats let’s say 5 times his weight. This claim is genuine but irrelevant, since unlike factory farmed animals, we do not make fish pregnant(don’t make them give births). Therefore, the quantity of the animals the fish eat is not increased by our consumption, unlike cows for example(that we rape to give birth).

a huge thanks to the people who read it so far. It’s really important to me. So if you got any useful piece of information about it, please let me know. I just wanna know for sure what is harmful the most- non factory farmed fish or vegan food. And please don’t bring up the assumption that indirect/unintentional killing is less bad than intentional, because I’m an educated vegan- I’m pretty aware about the consequences of my food choices. I am not ready to use the “unintentional assumption” as an excuse to not care about the objective suffering count of my choices.

Ohad said:
I am not ready to use the “unintentional assumption” as an excuse to not care about the objective suffering count of my choices.
Click to expand...

Why the heck not??

First point I would like to reiterate is that the amount of harm done to animals thru plant agriculture is less than most people assume. I already mentioned the radio tagged mice. well we don't radio tag insects but you have to assume that they too can run Away from the slow moving machinery . *

The second point I want to reiterate is that animals killed in plant agriculture are mostly inadvertent. And not to confuse the issue buy your grocer kills animals on purpose. your gorceries need to be protected from vermin. Its pretty much impossible to go thru life without causing some animal death. But we can all strive to minimize animal destruction.

The Vegans Society's definition of vegan nicely sidesteps this whole issue. Vegans just strive to avoid animal exploitation. it even has a caveat: as far as is possible and practicable.

Also from the Vegan Society

There are many ways to embrace vegan living. Yet one thing all vegans have in common is a plant-based diet avoiding all animal foods such as meat (including fish, shellfish and insects), dairy, eggs and honey - as well as avoiding animal-derived materials, products tested on animals and places that use animals for entertainment.​

What is a vegan and vegan food? What does veganism mean?

So fishing and eating fish are not vegan.

I guess you are still concerned that harvesting plant food is more harmful than harvesting fish.
I guess you must be thinking that killing one fish is better than the harm done to all the animals that are harmed by animal agriculture.

Besides overfishing, there is habitat destruction, derelict fishing gear, and bycatch.

Learn about overfishing, bycatch, habitat destruction within fishing practices and the environmental consequences.

* Another thing is that I've seen the machines that harvest spring greens and baby spinach. they are designed to reduce the destruction of animals and insects as much as possible. and there are also lots of crops that are still harvested by hand.
Reactions: PTree15, Emma JC and Tom L.

What happened to the first thread? ..

beancounter said:
What happened to the first thread? ..
Click to expand...

Hmm, then wouldn't that effectively be considered double posting?...

Apparently it's un updated version of the original one.

@Ohad --You say you are informed, but it doesn't take much research to realize the harm, both environmentally, and done to wildlife outside of the intended catch.
I suppose you could argue that "ideally" fishing could be better, but that's a lame argument, as it isn't better.
We're not talking some people on a remote island who supplement their diet by fishing with spears or even by their own hands, you're arguing that pescatarians relying on commercial fishing does less harm than strict vegetarians. 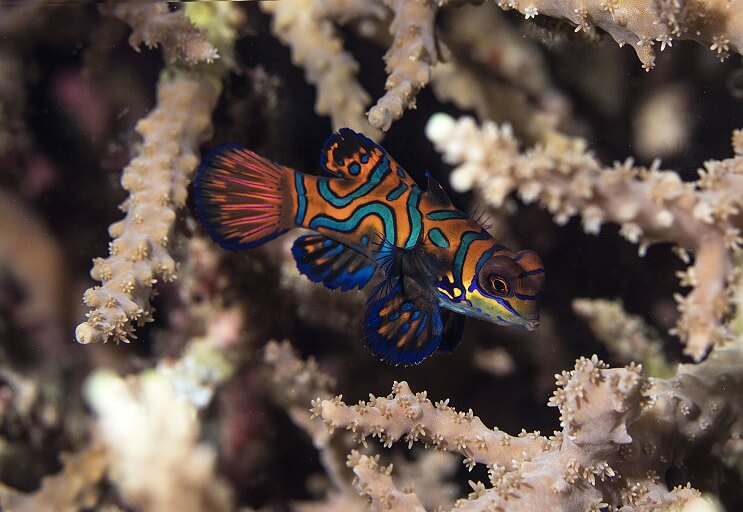 Share0Like0Tweet0LinkedIn0Pin0 Robert Woods has been a fish keeping enthusiast ever since his parents bought him is first tank at age 4. Since then, he has gone on to keep hundreds of different species and now educates aquarists through his online publication Fishkeeping World. Evidence points...

If you try and say people should only purchase ethically sourced fish--how is that different than ethically run farm systems? Farming doesnt' have to involve land, so why not argue that as preferable rather than the killing of fish,and destruction of the environment? Not to mention the sea birds and reptiles fishing kills.

shyvas said:
Apparently it's un updated version of the original one.
Click to expand...

This fails simply due to not enough to feed the world.

This would be deliberate murders

Fish are thought to be capable of pain, feelings and sentience. So we shouldn't kill them or cause them to suffer.

Directly killing seems worse than the killing of insects from plant food which happens by accident so is less morally relevant, plus there is little evidence that many animals really are killed by plant food growth.

Wild fish suffer quite badly when they are caught. The way they die is worse and more prolonged than farmed land animals (who live a worse life but have a quicker death).

Also, we are over fishing so much that the oceans are running out of fish. The problem is so severe that no fish makes more sense than less fish. The situation is completely out of control.

With a cow, you only have to kill 1 creature to feed 100 people (not that I am in favour of doing such a thing, certainly I am not). But, each time you eat fish you have killed 1 whole creature, in fact it´s worse than that, because of bycatch. Bycatch probably causes more death than accidental death in fields for growing plant foods.

So for these reasons I recommend you exclude fish from your diet.

PS Eating Animals by Jonathan Safran Foer is the book I read that had the longest section on fish farming.
Reactions: FlandersOD, PTree15, Emma JC and 2 others

Another aspect of the effect of fishing that hasn't been mentioned yet are the other animals that eat fish to survive. Other fish, seals, birds, bears, whales, all eat fish, and with all the over fishing they are left with little to eat.
In one overfished area, fishermen are killing any seals they see because they are passing the blame to the seals for the lack of fish.
Reactions: shyvas, FlandersOD, PTree15 and 4 others

Ohad said:
I just wanna know for sure what is harmful the most- non factory farmed fish or vegan food.
Click to expand...

You aren't going to know for sure. There isn't a quantitative solution here. Don't compromise your principles on a guess.

I think you've gotten plenty of thoughtful replies to make up your mind. If you're still struggling with this it's either an immature clinging to a need for certainty that doesn't exist, or attention-seeking contrarianism.
Reactions: KLS52, David3, FlandersOD and 4 others

Taking a fishhook in the side of one's face, then being pulled through the water just sounds icky to me.
Reactions: KLS52, David3, Emma JC and 1 other person
T

Cedars said:
Taking a fishhook in the side of one's face, then being pulled through the water just sounds icky to me.
Click to expand...

I agree. And being caught in a net, then dying from being unable to get oxygen out of the water, sounds no more pleasant.
Reactions: KLS52, Danielle, David3 and 4 others

Several of my friends are catch-and-release fishers and of course think it's perfectly humane. They were recently talking about techniques for removing a hook when they accidentally get one embedded in themselves...obviously you want to minimize pain or further damage. I asked which of those techniques they use for removing a hook from a fish...awkward silence, then they admitted they just yank it out.

It's strange how otherwise good people can be so willfully ignorant of the suffering they inflict.
Reactions: Lou

Why is sentience an argument for animal advocates & vegans?

Philosophy May 17, 2021
vgrooveman
V
S
Veganism has to be reconsidered

C
What's your take on insects?

The Ethical Case For Veganism