Does anyone else get horrible heartburn/acid reflux when they eat beans and lentils?

I want to get more iron from my foods (as I am always almost deficient in ferritin) and eating lentils and beans seems to be an easy way to get them up, but I think they are giving me the worst heartburn and acid reflux.

I think eating too much avocado can give me heartburn but I am not eating avocado at the moment as I am eating very low fat as I think this allows me to eat a huge amount of calories without gaining weight. (I want to see if having a very large amount of calories stops my male pattern baldness from progressing and also stops me from sometimes feeling lethargic after meals).

At first I thought I wasn't getting the pain when I varied the lentils I eat (e.g., going from green to brown and back again), but I just varied to cannelini beans and I can feel the burning sensation coming on.

Also, if I have legumes a few times a day it gets so bad that by night time I start to feel these sharp intense pains in the center of my chest that last for a split second every few minutes. The first time this happened I thought for a split second I was having a heart attack, but then I realized it was just the heartburn getting more intense.

So now basically the only foods I can eat are whole grains and vegetables and fruit, and I seem to be OK with tofu. But I don't think I can get enough iron from these foods because my ferritin levels always seem to get too low when I eat these. Legumes give such a huge amount of iron that I doesn't seem to be possible to get from other foods.
Last edited by a moderator: Mar 25, 2021
J

I think with me it is a genetic problem because my parents have the same problem if they consume legumes too frequently. Maybe I should try just having them every few days to see if that helps.

Hi Jools.
I thought your name sounded familiar and I checked your "history" and it seems like a couple of times a year you write in with some complaint. You may have said in some of your threads - it might be my fault for not checking but I'm really curious if you were successful in treating any of these complaints. Did you see a doctor? What worked? Other than the heartburn, how are you now?

Twenty years ago I was diagnosed with GERD. Before then I had almost never had heartburn. Although my father suffered from it a lot when he was older. The doctor performed no tests, there were no X-rays. But she knew what was wrong just from my symptoms. As she explained to me that its just that as I got older the LES got weaker or maybe it didn't make as good a seal as it used to. And although GERD is not necessarily caused by diet - it can be controlled with diet.

Up until a minute ago I would have sworn that it was not caused by my diet. But as I read your post I realized that 20 years ago was when I started transitioning to veganism. the amount of legumes in my diet increased significantly. (from maybe one or two servings a week to more than 4 servings each day)

Now before I start explaining what helped me, let me get this out of the way. Heartburn can be much more serious than just being uncomfortable. The pain you feel is stomach acid working on your esophagus. And your esophagus is not protected with a lining like your stomach is. You can do serious damage to your esophagus. if its severe or chronic you really should see a doctor about it.

Also GERD can be a contributing factor to insomnia. Although I had insomnia years before I had GERD. GERD did wake me up at night.

The thing that sent me to the doctor was that I would wake up at night with bile in my mouth. Although I did have some bouts of heartburn in the evening, my main issue was the bile rising during the night.

one of the things that the doctor suggested was a inclined pillow. I now sleep on my back with my head elevated. Of all the things I have done - that seems to be the one thing I can point to that was effective right away.

Some of the do's and don't are just basic stay heathy things. Except for pasta sauce I'm really good with the Do's and Don'ts. Also last year I lost a lot of weight and I've only had one bout in the last 12 months. and that came after I became overconfident and stopped using my pillow and I may have had done a few of the don'ts

Some of the do's and don'ts.

For years I took a regular strength Tums just before bed. As a preventative measure. but since its been so long since I have had a bout of GERD I stopped taking them. I still have a big bottle on my night stand but when I got heartburn at night I would take one. I think I am down to one or two a year.

I have taken some of the stronger OTCs. And they sort of worked but not as well as the Do's and Don'ts. Also they say in the instructions that you should only take them for like 2 or 3 weeks.

One of the things that really helped was I made sure that there were 4 or more hours between dinner and bed time. Late night snacking was a real killer. Now when I have a dessert I do it within an hour of dinner. and then no more.

For years I excluded tomatoes and citrus juices. This year I have started having both and without any ill effects.

I was never a big drinker but I stopped drinking everything but beer. in my case alcohol was a real trigger. I haven't had any alcohol in over a year.

I also lost a lot of weigh this year and that seems to have helped A LOT.

another thing to be careful about is sitting around after dinner. Get up and move around. I now include some chores to do after I have had dinner.

Regular exercise. Good luck and let us know how it goes.

Get the Facts About Gastroesophageal Reflux Disease (GERD)

WebMD offers a comprehensive look at the causes, symptoms, and treatments of gastroesophageal reflux disease (GERD), a digestive disorder that can lead to serious complications. 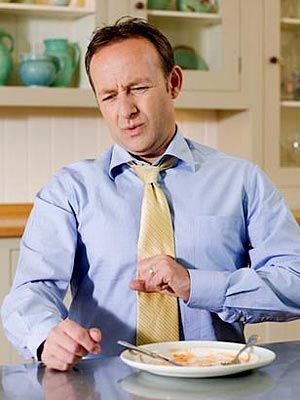 Heartburn and Foods: Dos and Don'ts

Many foods commonly trigger uncomfortable heartburn and acid reflux. Learn the dos and don'ts about heartburn causes and how to avoid that burning feeling.

I've got it under control now. It's either because of consuming too much water or because I don't vary the legume I'm having. If I change the legumes I have every day and don't drink much water I barely have any heartburn. (I don't know which one of these is causing the problem but don't want to only do one to figure out because I don't want to have heartburn again).

Can you consider a consult with a Registared Dietician? Not sure where you're from, in US a RD is certified where a nutritionist can just be anyone.

Look up this book at a library if you can, I've felt it incredibly helpful in many areas

I can't imagine how varying the beans could help. but I could see how maybe one type of bean could be worse than another.

The water thing might be a good clue tho.

I'm with Silva, how much water is too much water? Oh and the book she recommended is worth reading no matter what.

One of the reasons that the OTC drugs are not recommended long term is that your body can/will adjust to them and start producing more stomach acid.

I'm wondering if maybe "too much water" could have a similar result. Your stomach acid is kept diluted so your body makes more to make up for it.

This brings up a question I had that I never got resolved to my liking. Is it better to drink a glass of water after dinner? Does the water help the digestion process by helping to form a solution. or does diluting the acid hinder digestion. What about before? I've seen both ideas debated.
J

So I can have as much legumes now without having to worry about heartburn because I can just always have balsamic vinegar at the same time.

I wish the balsamic vinegar had the same effect on my constipation. My constipation has been so bad recently that I have had very painful hemorrhoids the past few days.
Reactions: KLS52

Vinegar actually bothers my stomach. I tried ACV for heartburn and thought I was going to die.

Vinegar for heartburn doesn't make any sense. vinegar is acidic.
The only thing I can think of is that perhaps because it is so acidic it could trigger something that tells your stomach to make Less hydrochloric acid.
Reactions: KLS52

Lou said:
Vinegar for heartburn doesn't make any sense. vinegar is acidic.
The only thing I can think of is that perhaps because it is so acidic it could trigger something that tells your stomach to make Less hydrochloric acid.
Click to expand...

Agreed. It’s what came up at the time for home remedies. And I have friends who swear by those Goli gummies for heartburn.

For constipation try Smooth Move tea. it does work pretty good and is very safe. you could have a cup every night before bed.
The other thing is a product called Senna. Senna is a natural laxative - its the same stuff that is in Smooth Move. You can start with one pill a day and work your way up. Remember the dosage that worked and then anytime you get constipated just start there. Senna works very well with a product called Stool Softener.
A less natural product but also effective is Ducalax.
Finally the sort of big guns is Bisacodyl Suppositories.

you can probably use any of these products regularly - but if you do, mention it to your doctor.

BTW, I am almost always super regular but when I was on chemo, the steroids I was taking were VERY constipating. All of these products were recommended to me by my Doctors including my RD.

KLS52 said:
Agreed. It’s what came up at the time for home remedies. And I have friends who swear by those Goli gummies for heartburn.
Click to expand...

Maybe by putting the vinegar on your food it starts the digestion of the food outside of your stomach so you stomach doesn't have to work that hard.
Reactions: KLS52

Lou said:
Maybe by putting the vinegar on your food it starts the digestion of the food outside of your stomach so you stomach doesn't have to work that hard.
Click to expand...

Maybe? I just know I’ve been so much better staying away from it but I miss my huge crunchy salads.

Hi Jolls, thankfully I don't have your complaint, but you could try adding a pinch of Hing-Aesafoetida to your beans.

Health & Body Wednesday at 12:59 PM
bEt
B
W
US I’d like to go vegan except for health & social reasons