Americans aren't too fond of evolution 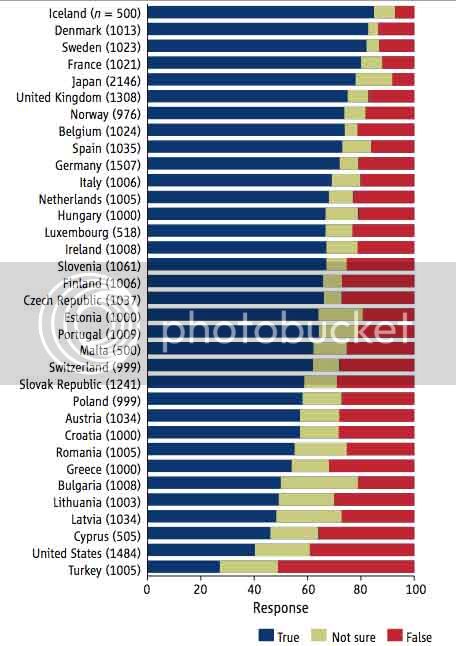 This chart depicts the public acceptance of evolution theory in 34 countries in 2005. Adults were asked to respond to the statement: "Human beings, as we know them, developed from earlier species of animals." The percentage of respondents who believed this to be true is marked in blue; those who believed it to be false, in red; and those who were not sure, in yellow.

A study of several such surveys taken since 1985 has found that the United States ranks next to last in acceptance of evolution theory among nations polled. Researchers point out that the number of Americans who are uncertain about the theory's validity has increased over the past 20 years.
Click to expand...

Much of the time, I'm pretty embarrassed to be an American.
Reactions: kazyeeqen and Amy SF

I can understand that it might feel depressing to consider that we just evolved from rodents, but it is also kind of cool, and scientists still haven't figured out the start of life on this planet(abiogenesis), and I think that there may be huge understandings in the way DNA works and process of inheritance.
Our bodies may form partly with supernatural information(like morphic fields thing) latched onto DNA, and the first cells, I think, were probably created by supernatural processes too.
Reactions: Freesia

I'm not sure what DNA actually does; maybe it is like the steel frame of a skyscraper, forming the basics, and then maybe the morphic fields(I really should read that book 'The Science Delusion') fill in the details.

I think I will ask my dad to bring down that book, and I'll have a bash at reading it.

From what I understand the morphic fields contain a lot of information, and the process of its development would be similar to DNA evolution.

I read somewhere online that some people think that a woman's fertilised egg chooses the sperm that fertilises it, so there would be an additional process in evolution. Crazy stuff, I know.

I think it is important to try to understand what motivates people to believe in creationism, rather than just criticise them for being stupid, or what not.

If some believes that humans, and/or life in general was divinely created, then evolution may just seem random and pointless, and lead a creationist to feel that life is meaningless.

Personally I think if you believe in God, then that makes everything part of creation, and even a blizzard in the middle of nowhere has meaning.

Blobbenstein said:
I read somewhere online that some people think that a woman's fertilised egg chooses the sperm that fertilises it,
Click to expand...


Actually, that's not that far off. The egg travels to the sperm as much as the sperm travels to the egg - and the egg releases receptors that draw certain sperm to it. I wouldn't go so far as to say it "chooses" the individual sperm, but it does attempt to weed out non-compatible/unhealthy sperm.

kibbleforlola said:
Actually, that's not that far off. The egg travels to the sperm as much as the sperm travels to the egg - and the egg releases receptors that draw certain sperm to it. I wouldn't go so far as to say it "chooses" the individual sperm, but it does attempt to weed out non-compatible/unhealthy sperm.
Click to expand...


Yeah, but that's different than Choosing the right sperm.

There were anecdotes from people who said they had relived being a sperm, and that the egg wouldn't let them in, for a while......I was googling about Primal Therapy.
Might be true, I really am not sure.

I know we have been taught that all these manly sperms are fighting and may the quickest and strongest win...but it appears the ovum might have a say in which sperm fertilizes it. Sorry they talk about animal testing.
http://www.sciencenews.org/view/feature/id/343197/description/As_Told_By_the_Egg
...Protein studies that do exist have focused mostly on the male’s side of the story, emphasizing sperm-on-sperm competition. That’s partly because sperm can be easier to study, and are much easier to come by, says Willie Swanson, a biologist at the University of Washington in Seattle. Unlike males, who churn out a lot of sperm, females produce a limited number of hard-to-collect eggs.“In some sense, the egg has been long ignored,” Swanson says.But now it’s the egg’s turn to tell her side of the story. With the help of a chicken, Jovine’s group at the Karolinska Institute in Sweden has determined the structure of an egg protein that binds to sperm at conception, giving scientists a glimpse of life’s initiation from the egg’s point of view. In the two years since that advance, researchers have begun hatching even more experiments to better understand how an egg attracts and unites with a sperm that suits her.Last year, scientists identified a sugary compound on the egg’s outer shell that helps sperm bind to egg. Early this year, scientists showed that mammalian eggs secrete a certain enzyme to avoid being fertilized by more than one sperm (which could bring death to egg and embryo). And a recent study suggests that sea urchin eggs devise ways to slow the fertilization process so a female can find the right match.

Remember being a sperm? Are you serious? You can't remember being a sperm - because a sperm isn't you. You're not you until sperm and egg meet and DNA is combined. To "remember being a sperm" plays into gross and highly inaccurate (but apparently hard to shake) notions of male "activeness" and female "passiveness". Sorry, the greeks were wrong. Men don't create tiny humans and their testes, and women are more than just empty vessels waiting to be filled.

In short, these people need to put down the bong and examine their misogyny.
Reactions: sequoia and RabbitLuvr

The egg is conscious too, in those anecdotes.

here is the site, I think, although I'm not in the mood to look for the specific page I read.
http://www.primalspirit.com/larimore2_1.htm

Blobbenstein said:
The egg is conscious too, in those anecdotes.

here is the site, I think, although I'm not in the mood to look for the specific page I read.
http://www.primalspirit.com/larimore2_1.htm
Click to expand...


Then why don't they remember being an ovum? Sorry, it still reeks of misogyny. And also of lsd induced hallucinations. Those people are being taken in, and if they want to believe it, that's on them. But it's not possible in real life, and it's not real science.

I think there are some anecdotes from the eggs point of view. It has nothing to do with misogyny, as far as I can see. The egg is conscious, and the sperm is conscious, and they come together to form as single consciousness.....if anything, they said that the egg has the memories of all the previous female ancestors , but the sperm was more of a live-for-the-moment kind of consciousness.

as I said; all a bit against the mainstream.
You must log in or register to reply here.

B
Question Not sure why to go vegan but curious.